What are Your Rights as an LGBTQ Immigrant?

Immigration issues are queer issues. No matter your gender identity or sexual orientation, if you’re seeking legal immigration services, you deserve to be represented equally. The good news is that within the past decade, there has not only been greater awareness of issues affecting the LGBTQ community but also the immigration laws have changed to reflect some of that awareness.

Immigration Rights and Benefits for the LGBTQ Community 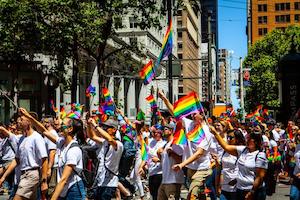 Did you know that over 260,000 people in the LGBTQ community are undocumented residents living in the United States? Many LGBTQ people in the U.S. have come from other countries fleeing persecution or have family members, friends, and partners who reside undocumented in the country.

There are a number of areas of the United States immigration law that affect members of the LGBTQ community. Some of these include:

As of 2013, same-sex married couples are eligible to petition immigration visas filed on behalf of a same-sex spouse without receiving an automatic denial. This is because, that same year, the United States Supreme Court in the landmark case of United States v. Windsor struck down a 1996 federal law known as the Defense of Marriage Act (“DOMA”) which was originally signed into law by President Bill Clinton defining “marriage,” for purpose of federal benefits, as being a union between a man and a woman.

The Supreme Court held that DOMA was unconstitutional. Based upon this ruling, the immigration authorities were required to recognize same-sex marriages on the same level as heterosexual marriages for purposes of immigration benefits. If you’re looking to sponsor your same-sex foreign national spouse, or you’re looking to get sponsored by your same-sex spouse who is a U.S. citizen or lawful permanent resident, you can file, or have filed on your behalf, a Petition for Alien Relative, Form I-130, to begin the process to determine eligibility for the immigration visa.

The U nonimmigrant status visa (U visa) protects any victim of sexual assault, domestic violence, or other crime(s) who is willing to assist authorities in the investigation process.

If you or a loved one is an undocumented LGBTQ person and were a victim of such crimes, suffered injury, can provide evidence, and are willing to cooperate with authorities, you may be eligible for a U visa regardless of documentation.

Sadly, despite the progress on “gay rights” experienced in the last decade, there is still significant discrimination against the LGBTQ community in many countries across the globe. For this reason, and because of the greater freedoms that exists in the United States, it is understandable why many in the LGBTQ community all over the world seek asylum here. Recognizing the discrimination and severe persecution members of the LBGTQ community can face in other countries, courts have held that even a single incident of persecution can constitute a basis for being granted asylum.

If you or a loved one is an LGBTQ person undocumented in the U.S. who has fled your home country because of the fear of persecution, you can file an Application for Asylum and for Withholding of Removal, Form I-589.

However, eligibility strongly depends on how soon you filed the application upon entering the U.S., and if you provide sufficient proof through documentation (medical reports, police reports, testimonials). The longer you wait, the less likely it is the government will approve your asylum application.

If eligible, this will drop the removal proceedings.

The BIL Team proudly supports the LGBTQ community. Our law firm is made up of a team of experienced and passionate attorneys specializing in immigration law. If you, or a loved one, need assistance with LGBTQ immigration related issues, we can help.