How Can I Apply for a Visa for My Fiancé?

Don’t get married in a foreign country because your fiancé(e) is not a U.S. citizen, apply for the Fiancé(e) K-1 Visa as soon as possible right here in the United States. With the advice and guidance of a skilled lawyer, you can save yourself a lot of time and grief navigating the complexities of the immigration system. 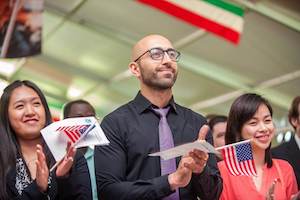 The Fiancé(e) K-1 Visa is a nonimmigrant visa applicable to foreign nationals who are engaged to U.S. citizens. If you apply for this visa and it’s approved, within 90 days upon your fiancé(e)’s entrance into the U.S., you (the sponsor) and your fiancé(e) must marry.

Certain requirements must be met to be eligible to receive the K-1 visa.

Steps to Apply for a K-1 Visa

The following are steps to applying for the K-1 Visa after proving your eligibility.

Submit the Petition for Alien Fiancé(e), Form I-129F. In addition, provide the supporting documents for proof of eligibility.

Upon approval, the National Visa Center (NVC) will send you a notice for which U.S. Embassy or Consulate your fiancé(e) must file a K-1 Visa application and attend the subsequent interview at.

If granted approval, your fiancé(e) will be appointed an interview. Before the interview, you must see an authorized medical examiner to receive and submit a valid medical report.

Attend the interview and bring in all the necessary supporting documents such as medical reports, proof of financial income, and identification.

If approved, your fiancé(e) will receive the K-1 visa and will have six months to enter the United States. Upon entering, you have 90 days to legally get married.

What If My Fiancé’s Visa is Denied?

There are three main reasons why a K-1 fiancé visa may get denied. First, you might have failed to properly fill out the paperwork. Secondly, there might be an impediment to you being a sponsor such as a disqualifying criminal history. Third, and most common, there might be a lack of evidence to support your claim of a genuine relationship with your fiancé.

If you file for a fiancé visa while your fiancé is physically present in the United States and the visa is denied, you can appeal within 30-days of the denial to the Administrative Appeals Office of the United States Citizenship and Immigration Service by filing form I-290B with the appropriate filing fee. Another less costly option is to withdraw the first petition for your fiancé and simply re-file it with any errors corrected.

If you fiancé is not physically present in the United States and the K-1 visa is denied at an Embassy overseas by a consular officer, you can request a review by the Consulate General. Each Embassy will have instructions on how to challenge a denial of a fiancé visa. For example, here’s a section from the website of the United States Embassy in France on fiancé visas.

Another option if your fiancé’s K-1 visa is denied is to simply marry your fiancé and then file an I-130 petition for a marriage visa. The advantage of this approach is that it removes the issue of your intent to marry. All of these options must be carefully thought through and for this reason, it helps to have an experienced immigration lawyer assisting you and avoiding common pitfalls in the process.

What If I Don’t Marry My Fiancé Within 90 Days?

When a K-1 fiancé visa is granted, it comes with a stipulation. The sponsor and recipient must get married within 90-days of the recipient entering the United States. The whole point of the visa is that it allows a fiancé to enter the United States for the specific purpose of getting married. When that doesn’t happen (i.e. no marriage takes place) then the visa automatically expires after 90-days in which case the fiancé must return to his or her home country or risk deportation. Overstaying a visa for certain periods of time can carry significant consequences such a future bar to returning to the United States.

Can My Fiancé Get a Green Card?

Once you and your fiancé get married, your new spouse may apply for legal permanent resident status (receive a “green card”) in the United States any time after your marriage by filing an Application to Register Permanent Residence or Adjust Status, Form I-485. Once this happens and adjustment is approved, your fiancé can then become a green card holder and eventually a United States citizen.

The BIL Team include experienced immigration attorneys and paralegals with knowledge and experience in handling Fiancé(e) K-1 Visas and Adjustment of Status cases. Our firm has handled countless numbers of these types of cases and you can rest assured we’ll work tirelessly to ensure that your fiancé(e) enters the United States as smoothly and as quickly as possible.