The 6 Most Important Things To Know About Deportation Proceedings

If you’re facing deportation, more formally referred to as “removal proceedings,” you may be afraid of being forced to return to the country you left and be forced from the United States which you now consider your home.  It’s important to understand why you may have to leave the US and what rights you have to try and remain here.

In recent times, immigration enforcement has become a government priority.  There is not a day that goes by without some aspect of immigration being discussed in the news.  Having competent legal representation to protect your rights is very important.  This blog is intended to help you understand some of the various aspects of deportation law.

Any person who is in the US and is not a citizen can be removed. Persons can be deported who:

2. How Are Deportation Proceedings Started?

Deportation proceedings often begin in one of two ways – either by arrest or upon receipt of a Notice to Appear (NTA) in federal Immigration Court.  Immigration laws are enforced by Immigration Customs Enforcement (ICE) – the enforcement agency within the Department of Homeland Security (DHS).

ICE has the authority to detain and question individuals about their immigration status.  ICE may also receive information from local law enforcement that leads to the arrest and detention of those suspected of immigration law violations.

Another agency, US Customs and Border Protection (CBP) – also under DHS – may determine that a person attempting entry at a US border is not eligible for entry and should be deported.

3. What Happens During Deportation Proceedings?

Once an agency within DHS identifies a noncitizen that is to be deported it must select which deportation proceedings to use and the level of priority to give the deportation.  DHS has the discretion not to deport someone even if the person is deportable.

If DHS decides a noncitizen is a priority to deport there are two types of deportation proceedings that may be used.  Most often persons already in the US will receive a notice to appear in an immigration court and a chance to present a defense to their removal.  Persons who are detained by CBP are typically put through expedited deportation proceedings that do not include appearing before a judge.

There are two ways that a noncitizen can avoid expedited removal.

4. What Are The Defenses To Deportation? 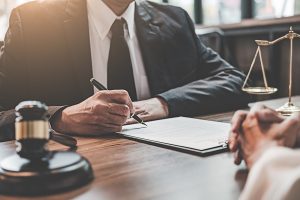 Depending upon the reason that a noncitizen is facing deportation, there are several defenses that may apply and allow a noncitizen to avoid removal and gain legal immigration status.

Each defense has specific qualifications that must be met.  The appropriate defense will depend on the circumstances of each particular case.  Having competent legal representation is often the difference between those who successfully defend removal and those who end up being forced to leave the US.

5. What Happens If You Get A Final Deportation Order?

A noncitizen who is denied the right to remain in the US will be issued a removal order.  The removal order can be appealed to the Board of Immigration Appeals (BIA), then to a Federal Circuit Court, and finally to the US Supreme Court. The process could take weeks, months or even years. The removal order will be suspended while the appeal is being considered.

If all appeals are exhausted and a noncitizen is issued a final order of removal, DHS will make arrangements to return the noncitizen to his or her country of citizenship.  During this period of time a noncitizen may be detained for a specified period or may be released under an order of supervision and allowed to work in the US.

A noncitizen has one last possibility to stop the deportation.  An application can be made to ICE for a stay of deportation or removal. The authority to grant or deny the stay is completely up to DHS and is typically granted for humanitarian reasons.  Again, having a really good lawyer helping can make the difference between success or failure.

6. When Can A Noncitizen Return To The US After Being Deported?

How long a noncitizen must wait before attempting to enter the US again depends on how and why the noncitizen was removed.