In March of 2020, as COVID-19 was declared a pandemic by the World Health Organization (WHO) and President Trump declared a national emergency in the United States, the Centers for Disease Control and Prevention (CDC) used its authority in the name of the protection of public health to suspend migration of foreign nationals across the borders from Canada and Mexico.

The migration ban has been extended several times since it was initially imposed. Opponents argue that the ban unfairly targets non-citizens while millions of other travelers are still allowed to come into the U.S. across the northern and southern borders.

Amid criticism and opposition from immigration advocacy groups, the Biden administration recently extended the ban indefinitely citing the rapid spread of the COVID-19 delta variant as justification.

How Can the US Justify Expelling Migrants Seeking Asylum? 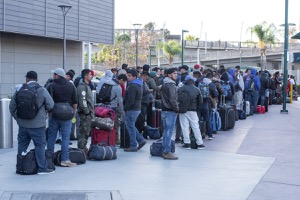 The justification for expelling migrants is a provision of the Public Health Service Act found in Title 42 of the United States Code. Under section 265 of the Act, the CDC can suspend the introduction of persons or property from countries outside the US where there exists a communicable disease and admitting persons from such countries presents a danger to public health.

New regulations were devised pursuant to the authority in Title 42 that specifically target non-citizens who try to come into the US from Mexico or Canada and provide for their immediate expulsion without first determining if they are sick or contagious.

The Problem With the Way Title 42 Is Being Interpreted

The Public Health Service Act became law in 1944. The intention at the time was to prevent the introduction of serious communicable diseases to the US by limiting potential carriers from coming in. By using ‘persons’ instead of a more particular classification, the law anticipated any attempt at entry from anyone who had come from a country known to have communicable diseases including those entering the US legally.

But the law is not being used as it was intended. Title 42 is being used to prevent legal immigration in direct conflict with existing immigration laws. The CDC order authorizes the US Border Patrol (USBP) to expel anyone without documentation no matter why they are seeking entrance. There is no apparent concern about the health risk posed by documented persons coming from Canada or Mexico.

One of the justifications for turning away non-citizens is the risk of having COVID spread through the detention facilities. Processing for expulsion is minimal and no orders are issued upon removal. While the law is being applied exclusively to non-citizens, it is not an immigration law and immigration procedures are not being followed.

Why Opponents of the Migration Ban Argue It Must Be Rescinded

Opponents of the ban say that the public health rationale does not support the actions taken by the Biden administration and immigration laws, such as the Refugee Act of 1980, supersede any authority granted by the 1944 law.

What Is Currently Happening At The US – Mexico Border

In July, interactions at the US-Mexico border between non-citizens and border personnel numbered over 200,000 – the most recorded in over 20 years. Encounters have been increasing steadily month over month since May of 2020.

The number of child migrants arriving alone at the US-Mexico border is at an all-time high of over 112,000 with still another month to go in the fiscal year. The initial CDC order under Title 42 included unaccompanied minors despite provisions to the contrary in the Trafficking Victims Protection Act (TVPA). In November 2020, a federal judge ruled that the CDC order violated the TVPA. Non-citizen children have not been expelled since that time and the Biden administration amended the CDC order to exempt unaccompanied minors.

The Future Of Title 42 Expulsions

The Biden administration is under pressure to rescind the policy. Whether or not to continue Title 42 must be re-evaluated in 60 days.

The United Nations has condemned the US policy and has urged the US to adopt screening protocols similar to other European nations that exempt those seeking asylum from entry bans.

Immigration advocacy groups including the American Civil Liberties Union have resumed a lawsuit against the Biden administration seeking to end the policy after negotiations to phase out Title 42 broke down.

Despite President Biden’s promises to restore humanity to a post-Trump immigration system, hundreds of thousands of migrants, many seeking asylum, have been turned away under the Biden administration and returned to countries where they face intolerable and dangerous conditions.